A downloadable game for Windows, macOS, and Linux

Ever End is a Visual Novel/Action game hybrid with a manga inspired presentation. Story is told through cinematic visual novel segments, and combat encounters use a fully 2D animated action battle system.

This is a demo that gives you a taste of the story, world and gameplay. The game is still under development and may not equate to what the final experience will be like.

Follow End, an ex-soldier with a mysterious power, on her quest to redeem herself by saving her sister, Zero, from a corrupt Organisation. In this demo End and Zero are trying to escape a lockdown of The Organisation headquarters while learning to cooperate after having been separated for several years. They are however stopped in their tracks by End’s self-proclaimed rival Quit, who has been hired by The Organisation to take them down. Make sure that End and Zero will be able to tackle the obstacles ahead on their journey to freedom.

With gathered feedback and experience, we are taking this project to next step. Team Amaranthine is back in full production, creating a game with a strong link between visual novel and gameplay. Ever End will be released episodically, which helps us focus  development as well as allowing us to release the game sooner!

and we have  more to announce and reveal about the new chapter soon.

In the mean time you can help us by:

Become a supporter on Patreon

As an extra incentive for you to become our Patreon you'll be getting access to news before non-Patreons and also get exclusive content related to Ever End. And off course you'll also finance the creation of Ever End series, helping us come one step closer to fulfilling our dream!

To be ready for the updates you can press follow here on itch and you can also follow us on social media:

or Join our Discord to hang out and talk with us and other fans.

Mac - Build seems to be a bit janky on our test machine, we would appreciate feedback on how well the mac version works, since we only have one Mac (MacBook Air) to test on.

Linux (Love build) - Linux users will have to install the Love2d framework and use the love build of the game.

Note that the love build can be run on any machine that supports the love framework.

I played the Demo for Chapter 0 at GGC this year and it was awesome! Can't wait to make a video for it on the release! <3

Fantastic game! Really looking forward to the episodes. Great job on the character design and the overall style. Love the song at the end of the demo. Be careful with typos and the pacing of the "reaction shots". Try not to overdo them. It kills the momentum in less than ideal places. Minor feedback. Congrats on what you've got so far. Keep it up!

Thanks for the feedback, we'll have it fixed when the next patch comes out! Nobody will have to retrun no more!

I mean you could try get it added to the dictionary

Heh, sure, let's put that as work in progress.

Retrun is also true on the PC version ;) and yes, lets get it into the dictionary ;^^

Wow,  I had a lof of fun playing it. the art style is incredible. It's like watching a cartoon series while playing. The up blue down red dodge system does require fast reflex speed and I died multiple time. But the skip battle opintion is very thoughtful. I like it.

here is my gameplay

Thank you for playing and sharing your video! We're very glad you liked it and hope you'll stay tuned for future updates!

Could you give more details on what the problem is? We'd love for you to be able to play!

Could you try sending the image in a different way? We get this message when we open your link: Thank you for the feedback! We believe the problem has to do with memory issues and our lead programmer is currently working on fixing that. We'll update you when stuff has progressed and thanks for the patience!

Mac build is now up, we are having some troubles on our test machine, so any feedback on how well it works on other macs are greatly appreciated

Oh, you seem to have misunderstood the controlscheme, the menu buttons are directional, so you can use the arrow keys or the wasd keys to control them. They only show xbox controller buttons atm, but we're working on adding keyboard visuals for people who prefer keyboard.

Not sure about the freeze though, are you sure it was not just loading? Our game is pretty heavy on resources, and the way it manages resources is pretty primitive atm. We are working on fixing that as well, but that might take some more time unfortunately =/

EDIT: Read the README included with the game for more details on the keyboard controls.

Awesome to hear! But it does seem like the Mac version is a bit wobbly, so thanks a lot for your patience and feedback! =)

Also, will there be non-controller supported versions of this?

There is currently fully functioning keyboard support, although it's somewhat lacking in finesse. The game includes a README where each control scheme is explained.

Oh! I need to get better at reading README:s... xD

Looking forward to seeing more, especially with this unique combat system that I can't wait to see where you take it moving forward. Love the Artstyle and how everything is frame animation!

Reply
Geg3 years ago(+1)
Thanks to all of the team at Amarathine for this game. The art was lovely and I was really pleasantly surprised by your battle mechanic for a Visual Novel!
I hope you enjoy the video and hope to see more from you guys :)
Reply
Amaranthine3 years ago (1 edit)

Glad you liked it Geg!  We really enjoyed the video and loved the silly voices you gave the characters =) We can't thank you enough for the exposition you gave the game and hope you stay tuned for coming updates!

Really happy you enjoyed it - voice acting isn't my strong suit haha. Don't mention it, I'm glad I found you guys and will definitely be following the game!

This is a really interesting hybrid game! While the combat doesn't really feel like more than a glorified quicktimme event, it does a good job of changing up the pace and flow of the game. While I did have some dificulty in the second fight due to not realizing it was building directly off the first and the lack of visual indicators for the resource based abilities, it falt pretty good oncec I got the hang of it. The story seems interesting enough, but you've fallen into on of the most annoying story/gameplay conflicts in gaming, beating an enemy and losing in a cutscene. I haped about this a bit in the video and think the game would be vastly improved by the omission of that. Overall, a pretty solid showing for a hybrid genre game and something I don't usually play that much.

Thank you for playing and showing off our game! Your feedback is very appreciated and we hope you stay tuned for coming updates =) 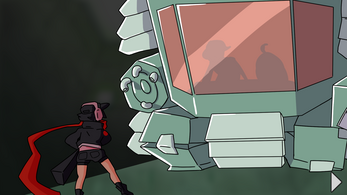 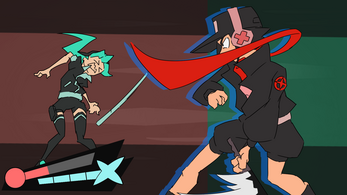 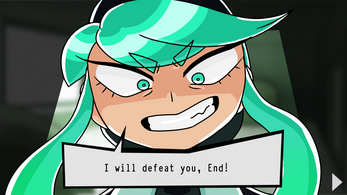 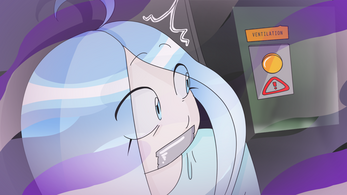